This film project started by chance. A few years ago I was looking for a horseback riding instructor and a riding friend told me that a new instructor was working at a nearby stable. I went to observe a lesson and chat with the instructor, Nancy Zeitlin. I had heard the name Nancy in my riding world, but didn’t really know who she was. After meeting her, she agreed to take me on as a student, in spite of my strictly amateur status. From our first lesson there were hints of an interesting history, and each week more was revealed as I rode around the arena. Every lesson was a wonderful riding experience and a new installment of her story. With each revelation, I found myself saying ‘what???’ The ‘what???’ factor led me to the idea of making a documentary about Nancy. It took a while for her to agree to expose her story to the public, to trust me and feel that it was time. After she agreed, I interested my old friend Marcia Rock, an independent producer and Director of News and Documentary at NYU Journalism, in the project. We have worked on every aspect together, Jerusalem-New York, with Marcia joining us here in Israel for a few weeks of filming. The filming took over two years, as I tagged along with Nancy on her journeys all over the country, documenting her life and her people. Marcia handled the editing in New York, and I joined her both online and in hops over the Atlantic Ocean. It is four years since I first started thinking about the film ‘Unreined’, to the final product. We hope that you enjoy it. 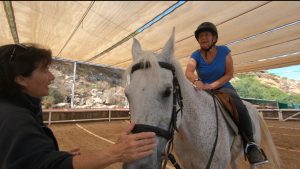 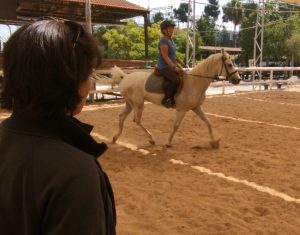