Nancy lived through the Yom Kippur War that changed the face of Israeli society and deepened her connection to Israel. After her army service in the Paratroopers Corps, she trained in Europe and North America, reaching the highest levels of equestrian achievement.  After several years abroad Nancy aimed to be the first Israeli equestrian Olympic contender. Those hopes were dashed when the First Lebanon War broke out and there was no funding for a suitable horse. She returned to Israel and became a leading figure in the Israeli equestrian world, winning championships and coaching champions.

Always a rebel, Nancy challenged the norms of her family and society. She married outside her faith, became a single mother, joined the Ultra-Orthodox

Jewish community, and then broke free.

A chance encounter with horse-loving Palestinians led her to a collaboration that would change her life. Following the Oslo Accords and the opening of the borders, Nancy began to train young Palestinians to ride and compete internationally. In the film she visits with Khaled, a former student in Jericho who now owns a stable in the West Bank. The emotional reunion includes reminiscing about their own initial stereotypes and how they learned to work together. Nancy never waivers in her pride of country but earns the respect of her Palestinian students and peers through her professionalism and compassion. After ten productive years the second Intifada took its toll and Nancy returned to Israel. Rebuilding her career, Nancy continues to inspire riders as a trainer and competition judge. Her story is presented here for the first time, including all its twists, surprises, and a new law degree.

Nancy continues to jump over the cultural and religious divisions fracturing Israeli society, promoting coexistence and the love of horses. 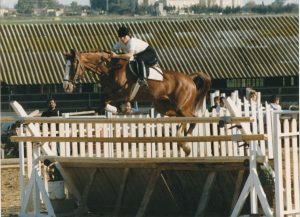